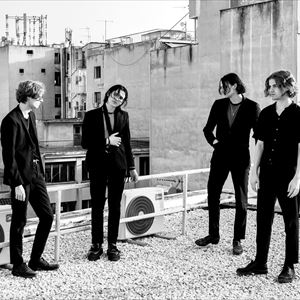 Isolated Youth were formed in a small coastal city north of Stockholm on the first of March 2017 by brothers William & Axel Mårdberg along with Egon Westberg Larsson and Andreas Geidemark.

In early 2019, Fabrika Records released the band’s debut-EP “Warfare.” Reviewers on the international post-punk scene soon agreed that “Warfare” is a “brilliant” debut deserving worldwide recognition. “One of the most beautiful works of art that contemporary post-punk can be proud of having received in the last few decades,” Threshold magazine announces. CVLT Nation, in turn, lists Isolated Youth as “one of six post-punk bands you need to hear right now,” while Post-punk.com praises their stunningly “authentic early 80’s guitar based post-punk sound.” While reminiscent of what postpunk once was, Isolated Youth’s sound is yet distinctive and original. Ringing guitars, haunting drums and strong base lines are combined with vocals characterised by fragility and beauty.