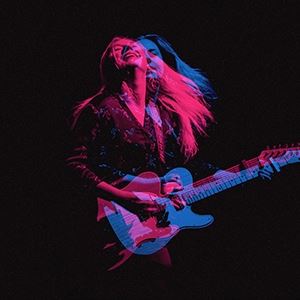 Six albums in, Joanne Shaw Taylor has nothing to prove, but plenty to say. Reckless Heart, the follow-up to 2016’s Top 20 hit Wild, finds the British blues musician in glorious form and a mischievous mood, one minute bearing her claws with catty lyrics, the next deliriously in love.

In several senses, it’s an album of firsts -the first made in Joanne’s adopted home town of Detroit, the first produced by her close friend Al Sutton (Greta Van Fleet, Kid Rock), the first largely recorded live and the first to feature an unplugged solo performance and, by chance, a passing train.

But it’s also an album that pulls the past in to the present. The good-time grooves of vintage, British blues-rock are given a modern makeover, while Joanne’s most powerful, yet intimate vocals to date take their cue from the gritty soul greats (Aretha, Tina, Mavis Staples) she grew up on.

“I’ve never had so much fun making an album,” says Joanne. “I feel like I’ve reached a stage where I can stop worrying what people think. The older I get, the more comfortable I am with being open and honest. If I’m pissed off, I’ll say it. If I want to be flirty, I will.”

Born in the Black Country and discovered aged 16 by Eurythmics’ co-founder Dave Stewart, Joanne has spent a decade releasing increasingly successful albums and touring the world. Along the way, she has won over fans from Joe Bonamassa to Stevie Wonder to Annie Lennox.

A decade ago, Joanne moved to Detroit as her career in the States was developing. On her first day there, she met the veteran producer Al Sutton and the pair instantly became friends. Ever since, they’ve talked of working together but due to conflicting schedules, not until Reckless Heart did it happen.

“Al’s always said that he wanted to make more of a live album with me,” says Joanne. “Why? Because that’s how he likes me, as a raw, aggressive guitarist.”

The pair started work this summer at Al’s fabulously-named Rust Belt Studios, a mere five miles from Joanne’s Detroit home. For the first time making an album, every night she slept in her own bed.

No guitar pedals were used in the making of Reckless Heart. It was straight in to amps for a simple, raw sound that encouraged Joanne to be ever more open in her songwriting. The loose, late ‘60s recordings of Jeff Beck and Rod Stewart became touchstones. Ditto the soul singers that Joanne discovered as a child courtesy of her mum.

“A big difference with Reckless Heart is that I’m revealing more of my soul influences,” says Joanne. “I’m a blues guitarist, but I’ve always considered myself a soul singer.

“My mum was a dancer and a huge fan of Northern Soul and Motown. Growing up, I listened to lots of blues guitarists –all of them men. When I decided to sing as well as play, I knew I’d never sound like them, so it was Aretha and Tina I turned to.”

Reckless Heart is a record drenched in emotion, the rawness of its sound mirrored in its lyrics. It’s both a break-up and a make-up album –in other words, a snapshot of a typical tempestuous relationship.

“It was interesting to write from both perspectives. The album was written in two parts –when we’d fallen out and when we got back together. What I thought was a break-up turned out to be a tiff.

Among Restless Heart’s most memorable lyrics is the opening line to the album’s searing title track -‘I couldn’t love you any less than I do now’. For weeks, Joanne had just that line, having hit a writing block following a tour with Foreigner. The rest came after listening to Rag’n’Bone Man’s early EPs.

“I love his big, husky voice and he inspired me to make the song quite gospel-y, with choir-like backing vocals. I wrote all of it on acoustic guitar, literally shouting the lyrics. I was angry and desperate. I wanted to capture that feeling of needing to scream to get your message across.”

The fierce Bad Love and rollicking opener In The Mood, complete with Faces-style piano, were written during the split. The gorgeous, acoustic guitar-led Break My Heart Anyway and the spectacular soul ballad I’m Only Lonely were penned once her anger had subsided. The groovy The Best Thing came after seeing Chris Stapleton in concert.

“I’d just been dumped,” recalls Joanne. “My friends took me to see Chris Stapleton to cheer me up. I didn’t know much about him, but I loved the show. It got me thinking that I’ve never made mid-tempo soul and I should.

“In an Uber on the way home, I started singing the hook of what became The Best Thing and recording it on my phone. I’d had a few drinks by then, obviously. At home, I finished the verses and put them to a riff I’d already written. By the morning, it was done.”

The rest of the album finds Joanne back in love, or just having fun. All My Love is pure Tina Turner, while album closer Jake’s Boogie is an unplugged, imperfect gem, recorded entirely live.

“It’s just me and a guitar, totally bare, which I’ve never done before,” says Joanne. “I’d had a few drinks before that one too. It’s not perfect but it’s passionate. I love that you can almost hear the studio. Oh, and a train. Al’s studio is next to train tracks and if you listen closely, you can hear a train passing.”

Bar that track, Reckless Heart features some of Detroit’s best session musicians –among them former players for Aretha Franklin.

“This is easily my most soulful album and that’s definitely to do with getting older –listen to me, I’m only 33! Also, quitting smoking, which I did last year and has changed my voice. The better a singer I am, the more capable I am of doing different styles of songs.

“I love soul and rock as much as I do blues. I enjoy singing ballads as much as soloing. I don’t always have to imagine I’m Eddie Van Halen on Michael Jackson’s Beat it, as I did as a kid. Now I sing to get my emotions out. Basically, it’s cheap therapy.”