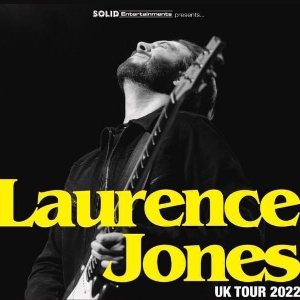 Laurence has developed a virtuoso as one of the UK’s hottest guitar players. He’s got several accolades and awards to his name winning “Young Artist Of The Year” in the British Blues Awards 3 years in a row which inducted him into the British Blues Hall Of Fame. Laurence and his band have supported / toured with the likes of Sir Van Morrison, Sir Ringo Starr, Joe Bonamassa, Status Quo, Buddy Guy, Jeff Beck, Johnny Winter & Kenny Wayne Shepherd.


Laurence Jones reached number 5 in the top 20 hardest working bands in the UK along with Chris Farlowe, Bay City Rollers, Chas & Dave & more... Don’t miss your chance to see “the future of the blues” live on tour - Classic Rock Magazine.

National Dutch treasure Johan Derksen is a fan of LJ and has invited him to appear on his TV show “Veronica Inside” 5 times. The official music video for “I’m Waiting” has over 1 million views on YouTube since his TV show appearances.

WITH SUPPORT FROM BLUE NATION
Blue Nation, a 3-piece band (2-piece Acoustic) from Birmingham, use Riff based Melodic Blues Rock from a reservoir of influences, including Beatles, Cream, Zeppelin, Brit Pop 90’s, more recently Rival Sons and Vintage Trouble, to create their memorable sound. Their acoustic shows are delivered by two accomplished musicians, fronted with stunning vocals. All backed up with impressive gig experience, stage presence and great songs.