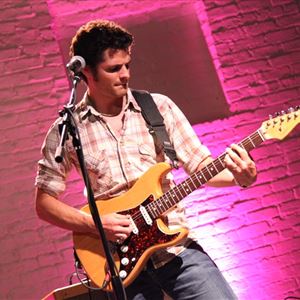 Guitarist, composer and producer Mark Lettieri is a true master of his craft.
Playing in the vibrant Metroplex gospel and R&B scene led Lettieri to join acclaimed jazz group Snarky Puppy in 2008, where he contributes not just as guitarist, but as an arranger and composer. His work with group has resulted in three GRAMMY Awards.
Outside of Snarky Puppy, Lettieri has released three albums as a leader: Knows in 2011, Futurefun in 2013, and most recently, Spark and Echo in 2016 (Ropeadope), which climbed to #11 on Billboard's Jazz Albums Chart, and #2 on iTunes' Jazz Chart. His fourth full-length album, Things of that Nature, was out late last year and is easily his most progressive and melodic.
Whether he's playing hip-hop, worship or instrumental jazz, Mark's undeniable flair and expertise makes him a must-see when he's in town.