Phil Campbell And The Bastard Sons 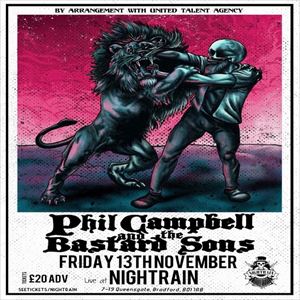 Phil Campbell and the Bastard Sons

From three-plus decades as Motörhead’s axeman to being voted number 20 in the pole of top 100 Welsh Heroes (comfortably beating JPR Williams, Roald Dahl and Sir Anthony Hopkins) to covering a Norweigian promoter in squirty cheese, Pontypridd-born Campbell continues to live life to the fullest with guitar in hand and humour intact.

Growing up admiring the likes of Jimi Hendrix, Tony Iommi and Jimmy Page, Campbell was playing professionally at the age of 13 with cabaret band Contrast on the Welsh club circuit. He bought his first Les Paul in 1973, and only 5 years later (in 1978!) he formed popular heavy metal indie band Persian Risk. Spending several years gigging with Risk, in February 1984 Campbell auditioned for the vacant guitar slot in popular beat group Motörhead. He ended up sharing guitar duties with fellow auditionee (and partner-in-cheap-laughs) Michael Würzel Burston.

In a 32 year Motörcareer which spanned three drummers, the departure of Würzel and the appearance of a horse onstage, Campbell was a major creative force and identity for the legendary rockers, selling millions of albums, filling dozens of passports and finding fun and games wherever he went. With 16 studio albums under his belt, Campbell has co-written some of Motörhead’s most-loved songs, including “Orgasmatron”, “Going To Brazil” and “Rock Out”. In fact, since joining the band, Campbell has co-written 90% of Motörhead’s studio output. He has also enjoyed various accolades, including 4 Grammy nominations and one Grammy win (in 2005), two Golden God awards from Metal Hammer magazine, a Kerrang! award, an official proclamation from the City of Los Angeles in August 2015, and a grand total of 16 speeding fines. Bear in mind that Phil is also El Presedente of the Campbell Comedy Corporation.