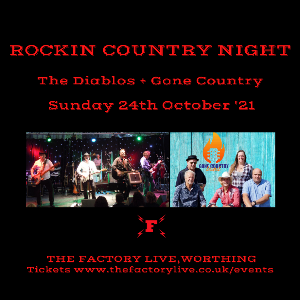 14s - 18s must be accompanied by an adult. No refunds will be given for incorrectly booked tickets.

View venue accessibility information for The Factory Live, Worthing
The Diablos are the UKs foremost Country-Rock band. To date they have had 6 number ones on the British Country charts with five original albums under their belt. Their 2021 album " Leaving Santa Rosa" is the latest to receive critical acclaim and five star reviews:

"To get the musical picture of this great band, imagine the Eagles having a few beers with The Mavericks while listening to Johnny Cash on the juke box!"
Maverick Country Magazine.

A rare opportunity to see this great 5 piece from Brighton for the first time at The Factory,  together with Guilford based country outfit "Gone Country".
Gone Country are a five piece who recently reformed after many years playing the UK country music festival circuit. Headed by charismatic front man, Stu Edwards, they play a mixture of classic country tunes and modern classics.

A fantastic night for those that love their country music and even those that don't!