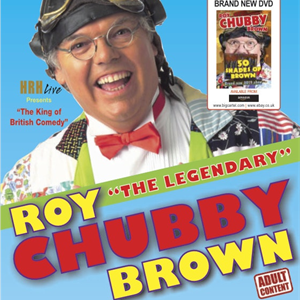 Roy Chubby Brown may not be everyone’s cup of tea, but there are lots different teas out there to try.

To understand Chubby, you need to know that he had tough start in life and worked hard to become one of the most successful comedians in the world. His real name is Royston Vasey, which is the name the writers gave to the village in the popular T.V. series ‘The League of Gentlemen’.

The team behind the show were big fans of Chubby and used his name as a tribute. In fact, they asked him to play the part of the swearing
So if you fancy a good night out and a laugh, you will enjoy an evening with the down to earth comedy legend who says “I’ve never had stars in my eyes, I just like working and making people laugh” But if you are easily offended, then it’s probably not going to be your cup of tea!

If you are easily offended then please do not book tickets for this show.

Please be aware that the bars will be closed during 'Chubby's' performance and will re-open after the show.