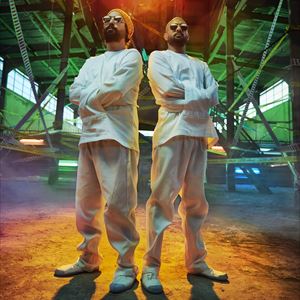 Founded in 2012 by Ahmed Bahaa and Moe El-3rkan, the band has become known for their Middle East power fusion of upbeat tempos, Arabic reggae-ska infused pop and unique brand of comedic social commentary. Think of a mix of Barenaked Ladies' humorous pop fused with Shaggy’s swagger and the unapologetic bounce of hip-hop. Adding in some touches of Latin mambo, biting saxophone lines and relentlessly catchy basslines, Sharmoofers have created an unparalleled and unforgettable live performance.

The band’s London show takes place after their recent receipt of "Best International Band" Award from the prestigious Boisdale Music Awards. Now how’s that for a British Invasion!

This event is 16+
Scala is not wheelchair accessible
Online ticketing will close at 18:30 on the day of the event - unless sold out in advance, limited tickets will be sold on the door.