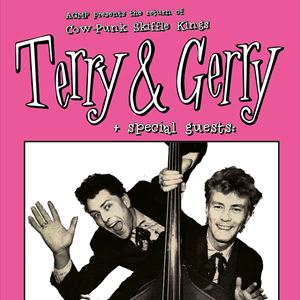 In the mid-eighties Cow-Punk Skiffle Kings Terry & Gerry released six singles and one album, touring with the Boothill Foot-Tappers, Billy Bragg, Hank Wangford, The Men They Couldn't Hang and more. BBC Radio 1's John Peel was a massive supporter of the group along with Morrissey, Joe Strummer of The Clash and Shane MacGowan from The Pogues.

The United Stöats of America take the essence of bluegrass, rockabilly & skiffle and add some rock solid drumming and transform other people songs into something totally unique.