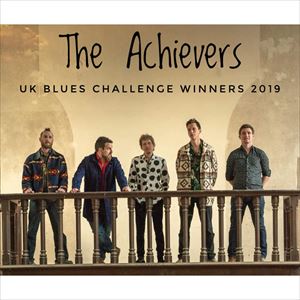 All The Achievers performances

The Achievers are one of the most talked about and critically acclaimed bands on the UK Blues and Roots Music scene. With a reputation for innovation and originality they prove that soul, groove and song-craft still matter in the blues.

Based in Gloucestershire but touring UK & Europe since 2017, The Achievers' own brand of modern, secular 'Dancefloor Gospel' has catapulted them from near-complete obscurity to rave reviews and big-stage appearances across The World. In September 2019 the band won one of the most prestigious accolades in British Blues Music when they were selected to represent the UK at the International and European Blues Challenges in 2020.

With their infectious rhythms, joyful melodies and four-part harmonies The Achievers stand proudly as British Blues & Roots outliers. A rare appearance in Chester will see them performing tracks from their new critically acclaimed album  'The Lost Arc' which reached #1 in the Independent Blues Broadcasters Charts and radio play from Cerys Matthews on BBC Radio 2.
"The most exciting & original blues band in the UK. Their new album is the best thing I've heard since their last one!" - The Blues Hour
"Part of their appeal is that they're so hard to quantify...I suggest you see them at the earliest opportunity" - Blues Matters Magazine
"Refreshingly different" - Blues In Britain

"Traditional and quirky at the same time, upbeat and joyful...every song is an undoubted foot-tapper" - Velvet Thunder

"The Achievers’ passionate approach to music-making really is a joy." Morning Star