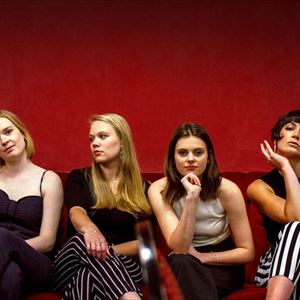 All The Magpies performances

York-based singer and mandolinist, Polly Bolton and Bradford singer-songwriter, Bella Gaffney first jammed backstage after a show in York in the autumn of 2017 and the Magpies were hatched! A great musical friendship, they work collaboratively, arranging material led by powerful vocals and glittering instrumental collaboration. They each draw on their transatlantic influences to create their own blend of Celtic, bluegrass, old time and folk. In 2018, the line-up expanded to a quartet, when they were joined by acclaimed cellist Sarah Smout (Michael Chapman, Mediaeval Baebes, Bridget St John, Jess Morgan) and Holly Brandon on fiddle.

The project has been exceptionally well received so far, in 2018 they have performed at Cambridge Folk Festival, main stage at Wickham Festival, Towersey Festival, Deer Shed Festival, Grassington and many more. They released their debut EP at a sold-out show at The Great Yorkshire Fringe in July.  So far in 2019 they have been to Folk Alliance International in Montreal, been on tour in Ireland and the UK festival scene, and supported John Smith on his recent tour!

Currently in the studio recording their debut album, which will be released to coincide with their spring tour.

‘A natural chemistry... all voices blend and harmonise beautifully... the mix of styles offers so much promise.’ - Folk Radio UK