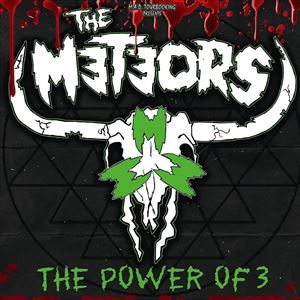 All The Meteors performances

The greatest Pschobilly band ever - first time in Stockton.

Only The Meteors Are Pure Psychobilly.

The Meteors started fourty years ago as a reaction against the soft rockabilly that was popular at that time and they have now evolved to become the acknowledged “Kings of Psychobilly”.

Their audience has continually expanded, and includes not just psychobillies, but everybody from rockabillies and punks, to bikers, and most alternatives. They are the original creators of Psychobilly Music, and although they have spawned hundreds of imitations, The Meteors are proud to be the only pure Psychobilly band ever. Their songs are inspired by their personal experiences and interests; Horror, Perversion, and Death in general. They list their hobbies as motorbikes, Rock ’n’ Roll, and burying the living; amongst their heroes are Michael Myers, Charles Manson and Mark Chapman the man who shot John Lennon.

They have now made no less than 40 official albums, and countless singles, not to mention dozens of compilations and re-issues. Many were made in their own recording studio, “In Heaven” a fully working pro studio used by 100’s of bands including some very famous household names and lead-man P. Paul Fenech has also released nine successful solo albums. (They have also featured in many films and numerous TV shows) Worldwide sales have increased steadily over the years, and they have toured almost continuously to support these releases.

Their live show is wild and addictive, (they have done it over thousands of times in fact this year passing their five thousand five hundredth) and has been seen in just about every country in the world, including Japan, several tours of America, and every major city in Europe and Scandinavia even spending a sell out week in Israel, Everybody is welcome at a Meteors show, and the band make a point that The Meteors Live is a political or religious free zone. People should come to enjoy the music, and to wreck if they are brave enough! It’s wild and sweaty, but nobody gets seriously hurt.

They are supported by a flourishing fan base, with thousands of supporters worldwide, who are kept in touch by the website www.yendor71.com which is updated daily with tours, band news and new merchandise, and there are several internet web sites devoted to them. And they receive daily e-mail from fans from the 4 corners of the earth. Although there have been line-up changes over the years, (Paul Fenech being the only original member) the search for the perfect combination is now over. The Meteors are a known name, experienced, professional working band, with an established audience. Their most recent album release is “Doing The Lords Work” which has been very well received by press & audience around the world.

Whatever you do don’t forget;
Only The Meteors Are Pure Psychobilly.