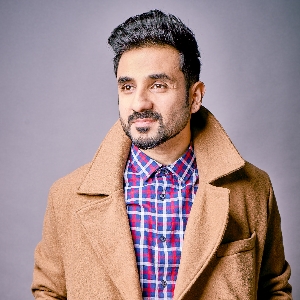 SEATING IS ALLOCATED - Seating will be allocated by venue staff before the show.
Please call the Glee Box Office on 0871 472 0400 or email
info@glee.co.uk to be seated with other ticket holders or if you have any seating requests.

This event will be sold to full capacity, with no distancing. Full COVID-safety guidelines available here.

All under 25s may require government-issued photo ID.

Vir
Das, fresh off an Emmy nomination for his latest Netflix stand-up special, brings you his brand new Wanted world tour – a show about freedom, a journey into foolishness, and a perspective that takes you across the world. Through his tours, Vir has fast become the biggest English-speaking comedian in India - cementing himself as one of the country’s top stand-ups, actors, writers and musicians. Now, following sell-out runs across the continents, catch the global phenomenon as he brings his “mixture of audacity and humility” (Boston Globe) to the UK - filling an international vacancy for an authentic Indian perspective.

Outside of his Bollywood films, Vir can most recently be seen in Judd Apatow’s The Bubble on Netfix, and in his four Netfix comedy specials: Outside In, For India, Losing It and Abroad Understanding.